Prefil (Pressure Filtration) is an established method of analysing the inclusion content of molten aluminium by forcing the liquid metal, under pressure, through a fine ceramic filter such that the inclusions are largely filtered out of the metal by forming a cake of inclusions on the filter surface. As the cake builds in thickness the flow rate of metal through the filter slows down and by measuring the mass of aluminium filtered as a function of time a mass filtered (y axis) vs. time (x axis) graph is obtained as the basic Prefil output data displayed on the screen of the Prefil unit. The raw data from the Prefil test is also available as a .pre file which can be exported to a USB memory stick or via a network, if available.

The inclusions in the molten metal are resposible for the curvature (i.e. deviation from a straight line) of the mass vs. time curve and traditionally this has been judged by the Prefil operator by eye and by experience. The Prefil test also creates a solid residue containing the filter and the inclusions and this can be analysed by the PoDFA method using optical metallography to determine the inclusion volume fraction in mm2/kg.

Premetz (Prefil Metrics) is a new way to analyse Prefil curves, to give a more reliable and accurate assessment of the level of inclusions in molten aluminium. The Prefil test passes typically 1.4kg of liquid aluminium under pressure through a filter, recording the weight filtered as a function of time. For perfectly clean metal (no inclusions present), the weight filtered should increase linearly with time, depending only on the permeability of the filter, as shown below. 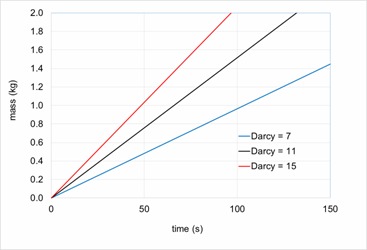 The plot shows the types of weight versus time plots that would be expected for different filter permeabilities (measured in units of darcy). The range of permeabilities shown covers those typically exhibited by commercially available Prefil filters (note the permeability of a filter to liquid aluminium is generally very different from the quoted permeability as measured by passing compressed air through the filter).

One of the biggest weaknesses of the traditional Prefil test is the variation in filter permeability from test to test, which can easily swamp any variation in metal quality between tests. The Premetz method has been developed to eliminate this limitation, and to provide a better, more reliable quantification of metal cleanliness.